I am a bad mother and I did only realise his birthday was
the day before on Monday night! So effectively I missed his birthday. I am
sorry Ralph. We will celebrate it this weekend I promise.

My little fur baby is no longer a puppy. He is now a
fully-fledged dog. As anyone that knows Ralph will know he is very small.
Probably about 30cm tall so most people think he is a puppy. I wanted an Alaskan Klee Kai
because I knew they would look cute like a puppy forever. 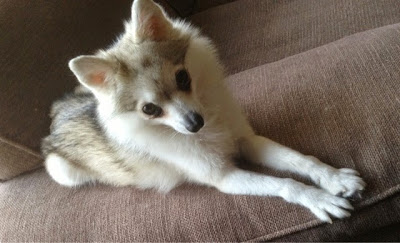 Saying that it is remarkable how much he has changed lately,
not in his looks, but in his ways and behaviour. I really was not expecting
that. We have lots of building work going on at the moment at home and I know
it affects him but he is taking it all so well. He used to sleep on our bed but
it meant everything was covered in his fluff. With the new bedroom finished
(and white sheets!) and the baby on the way we made the decision to make our
bedroom a ralph free zone. He comes in but if he gets on the bed we tell him to
get down and he is learning. He has a little furry rug on the floor that he now
sits on. At night he now sleeps in the living room. He was sleeping in the
kitchen in his house but what with that now being a building site we had to move
him out. It does mean that he now chooses to sleep on the sofa rather than in
his bed! Cheeky boy! But as everything is covered in dust downstairs anyway we
are not too worried. 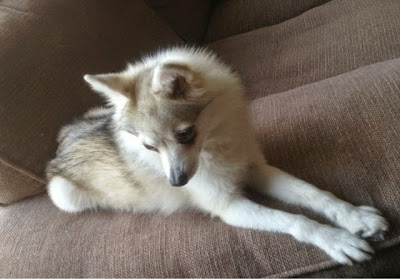 He really seems older this year. He is quieter and seems to
sleep more. I was worried this was because of the all the workmen we had coming
in and out when our bathroom was being done and that it was stressing him out
when they were there. He is used to it just being him or us at home! They have
stopped coming for the time being and he is still like it so I think my baby is
just growing up.
We have a couple of friends with children and he is so good
with them. Especially the babies. This is reassuring as you never know how dogs
are going to be when a new baby moves in. Fingers crossed he is showing good
signs.

His favourite toys are his meerkats, of compare the meerkat fame. You can see one in the bottom picture. He has 3, Sergei, Maya and baby Oleg. They are by far his favourite toys and there is always a meerkat close by him! He even watches the advert when it comes on the tv.

His favourite treats are cheesey bites from pedigree and cheese.

His favourite spot to sit is on the arm of the sofa, as you can see from the pictures. He likes to look at all the people walking by and occasionally growl at the other dogs.

He has been a wonderful addition to our family and we
wouldn’t change him for the world. He is loved by everyone in our extended
family as well and is thoroughly spoilt every Christmas. Especially the boys!
They said he wasn’t a proper dog being so small but he has captured their
hearts. Here’s to celebrating many more birthdays with you ralph dogs! We love
you xxxxxxxxx
﻿
﻿
Birthdaydog
Leave a Comment
Lifestyle
Share: